Menu
Log in
Register
Install the app
You are using an out of date browser. It may not display this or other websites correctly.
You should upgrade or use an alternative browser.

Well, we're a couple of days into Black Sheep week. Sunday was 2 moderate trails: Box Car Loop and Kamikazi. Both are pretty easy with perhaps one or two interesting sections. We had great wheeling with no issues, at least for the first day. Different turnout this year with no H1s, fewer Jeeps and at least 4 H3s with SAS.

All of these photos can be found here and downloaded in hi-res. https://alrock.smugmug.com/Offroading-2022/Box-Car-Loop-and-Kamikazi-041722/

Reloader on a modest descent. 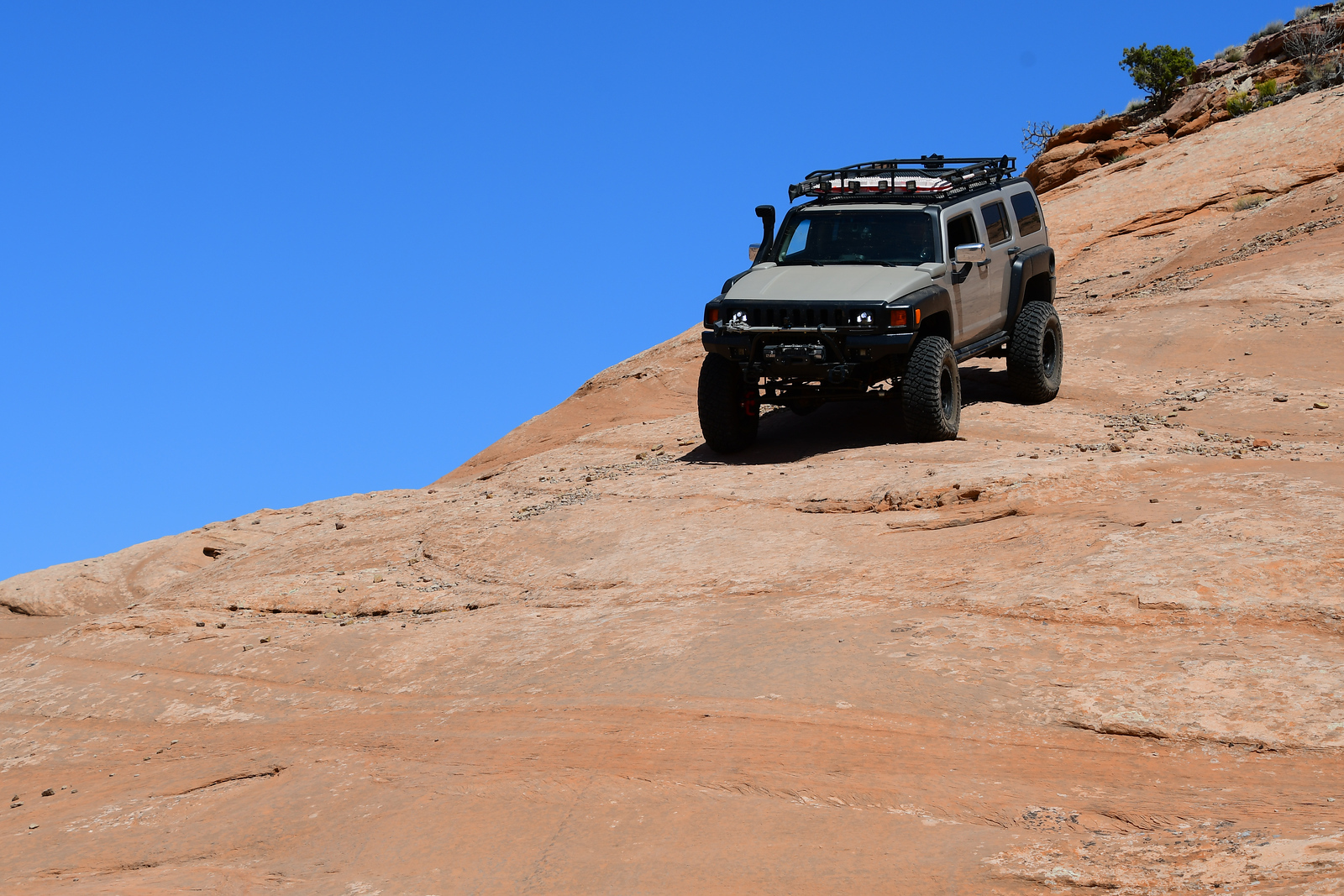 Some of the gang

The view from Kamikazi

Monday was Steel Bender. We had nine vehicles with one JK and the rest were H3s. The trail was in good condition though the Fall was a bit different. Me, being the foolish one, said I don't need to stack rocks for the fall like we normally do, it'll be fine. Wow, that was a huge drop. While I came out unscathed, I didn't want others to have that same drop. It was too close to being really bad at about 6' tall. For the remainder of the group we had about a foot of rocks stacked to make it a 5' drop, thanks to Reloader and his construction gang.

At the beginning of Steel Bender in the rough and bouncy section, Korby's side airbags went off with a Kaboom! He cut them out and removed the fuse to get rid of the SRS and other lights. Not a great way to start the trail.

And towards the end, just as Rascole finished going down a series of ledges, his main leaf snapped right in the middle. Looking at it later, it was already cracked (Deaver really didn't build this set properly, Rascole could explain) so they applied a set of ratchet straps to get the axle back into place and hold it there for the remainder of the trail, and back to the Outpost for a repair. Luckily, Korby donated a set of brand new Old Man Emu springs to the raffle and Rascole won them before the event even started!

All of my pics are here and can be downloaded: https://alrock.smugmug.com/Offroading-2022/Steel-Bender-041822/


Near the beginning of the trail 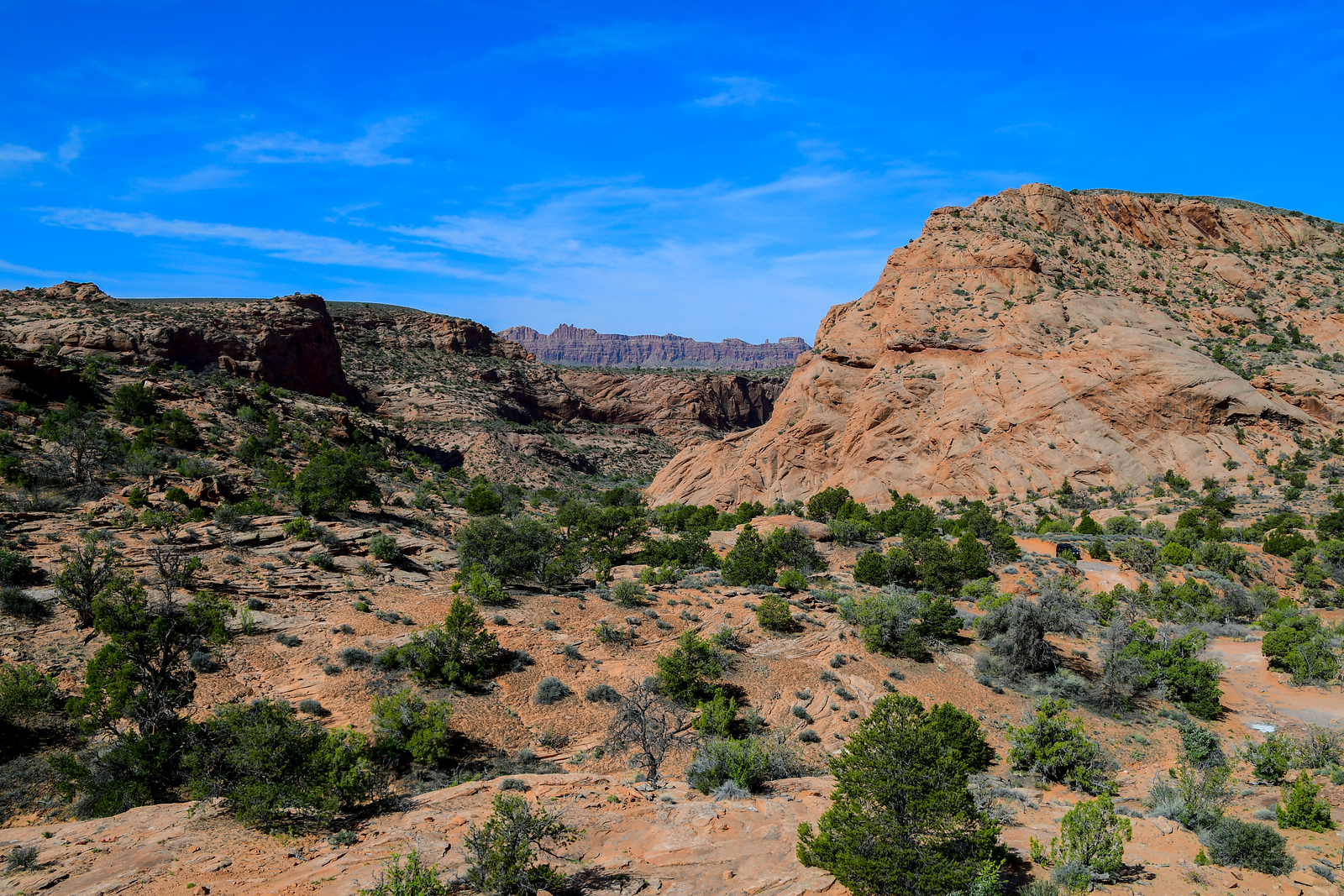 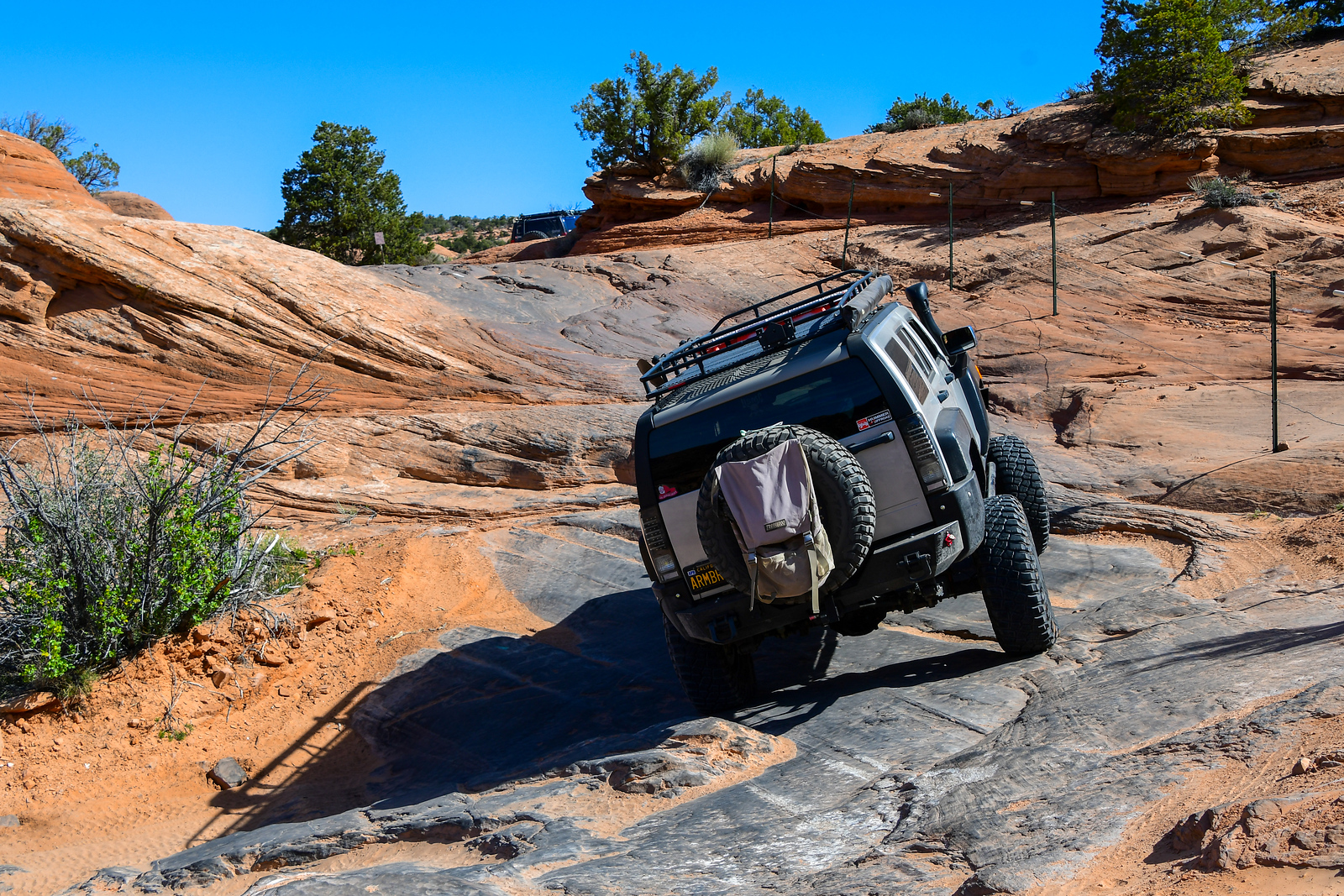 Endeavored H3 in the background, cgalpha in the foreground

Me on the fall

Greg on the second drop

cgalpha at the Witches Steps, making it look easy. I demonstrated how to make it look hard

Anyone take the bypass at the Fall? No H1s, has Kurt hooked up with you guys yet?

Thanks for the pictures.

Sent from my SM-S906U1 using Tapatalk

I'm living vicariously through you guys. Wish I was there with you all.

Here’s what I took during the trip so far:

3Hummers said:
Anyone take the bypass at the Fall? No H1s, has Kurt hooked up with you guys yet?
Click to expand...

No one took the bypass though a few thought about it. Kurt's in town but kept having issues preventing him from joining. He should be on today's Seven Mile trail

Tuesday was Hell's Revenge day. Good day for wheeling though the wind picked up on occasion sending lots of sand flying about. Hell's Gate was in good condition without too much sand in it. The trail was quiet compared to most times we're there, though there was a fair amount of traffic towards the entrance when we went back out that way. A Jeep in the group behind us almost rolled on the very first ledge climb, even before you get to the dinosaur tracks overlooking Lion's Back. I guess he had suspension issues and luckily stopped just in time. He went home to fix his Jeep. 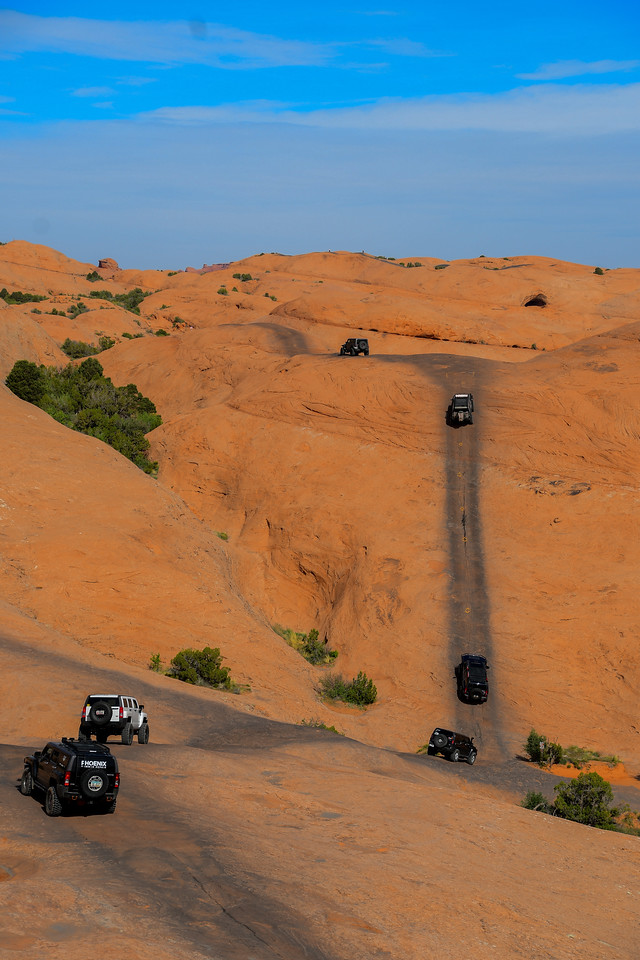 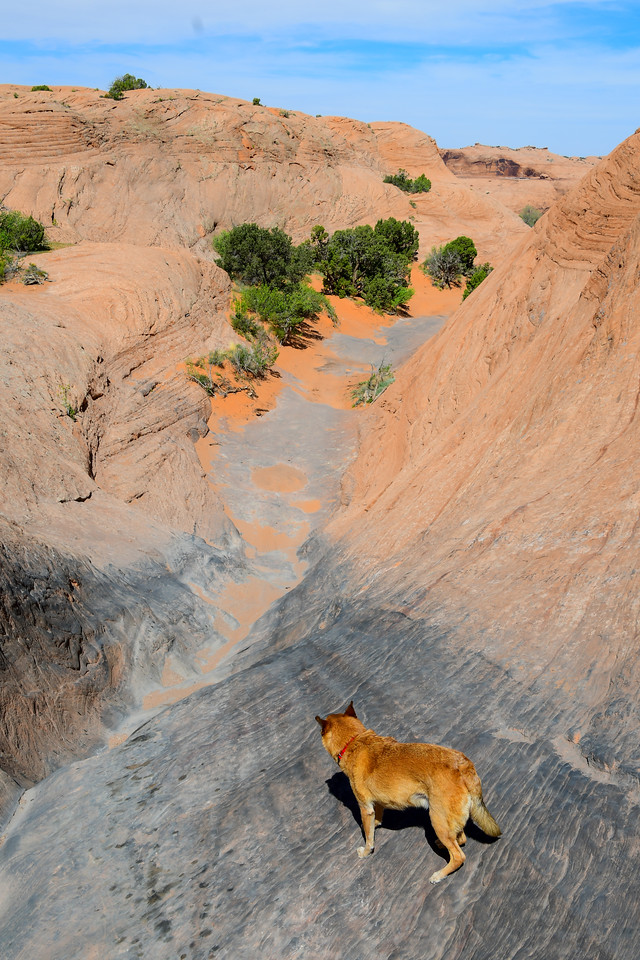 Endeavored H3 on the Gate. He took a flawless line up the Gate and didn't even lift a tire

cgalpha on the Gate. The first line I put him on didn't work, and he had a tire 3' in the air and it wasn't getting better. Backed him off a bit and he took a perfect line out, with another excellent run

Greg and his 5 speed manual on the Gate. Another nice smooth run

With Jason, I had him too low on the wall and his Jeep slipped off but no harm done. Backed him up a foot, drove forward and right up the wall and got back on the line.

Rascole also took a good line up the Gate

Lot of different lines on the gate.

There are some larger videos in this link, so check back in a few hours for more photos/content. It’s actively uploading.
Last edited: Apr 21, 2022

Talked about for years, tried by many, Prittchett Canyon. Had a great opportunity to ride copilot with chris in his brothers JK on tons and 40's. Cj did a great axle swap, Connor had no issues mechanically besides being s squeakfest.

Chris/06h3 attempting a tough line at the brickyard:

Connor/cgalpha walking up another line at the brickyard

Thursday was an interesting day on Metal Masher. It's proving to be a kryptonite trail for several vehicles. 06 H3, driving his brother's JK, broke a front axle. I broke my front diff (it was starting to fail on Tuesday, I think) and split my rack, though it's working and not leaking. This is after several other breaks over the past years.

Only got a few pictures since I didn't have much time to do anything but keep an eye on the strap on the front of my vehicle, and the back of JPaul's H3. All pics are here: https://alrock.smugmug.com/Offroading-2022/Metal-Masher-042122/

The rack, split right between the two mounting bolts

We heard a pop on chewy, ended up shearing an upper link, trail side weld repair in progress.

Pittsburg 15mm took one for the team

Chris getting up rocker knocker

Connor in the classic rocker knocker approach angle, chris spotting. We had great guidance from a barnes4wd team ahead of us.

Didnt get too much of axle hill, we were all focused on getting chris up and over. Our welds and 15mm wrench failed but went through abuse. Both rigs had to winch. We believe a round 2 will be in order when BSW comes back.

Chris and Connor coming up son of rockpile.

Connor going up the middle line at yellow hill.

Chris and Connor at the end of Pritchett Canyon

The crew. From left to right.

Great day on Pritchett! I’m bummed my H3 wasn’t there to do it with Connor but I’m also just glad to have completed the trail. It’s been something we have talked about for a very very long time.

I will work on having a set of streetable tires again so I can still take my rig out far distances if I can’t take the tow rig. Those 43s would have melted off by the time I put 1000 road miles on them and I don’t have a spare 43 in case of roadside tire issues....So the JK came in clutch, road worthy 40s and a spare.

Either way, great day!!! Connor did great and it shows how versatile a SAS H3 is. Drives it 1400 miles, wheels Pritchett and is ready to drive home.

The repair wasn’t the best but got us off the trail . I was shocked to see that Clayton long arms for a JK are only 1.75 .120 wall. The SAS’d H3s all run 2in .25 wall. Either way we adapted and overcame with 2 car batteries, jumper cables and welding rod. We did the best we could lol. I’m not a stick welder....I should practice more.

Metal masher sucks! Lol last year I broke a well deserved shaft for being an idiot. 100% my fault. The driveshaft was an age thing, I think, being 6+ years old. This year, different rig, but broke a damn dana 60 u joint on literally nothing! It’s only a year old to boot. So metal masher has my number....

Here is a video of our adventures on Pritchett. It's long I know but it's mainly raw footage all spliced together. Feel free to skip through it lol

Sent from my SM-G998U using Tapatalk

Great Pix, Funny how times change but the rocks remain the same...
3

Hey Neo, when are you getting back into wheeling?

Amazing trip. Am grateful there were no serious failures and everyone went home safe. Really look forward to next year.

Dropped off the broken leaf springs to Deaver. They are going to make it right, full set getting replaced. A miscommunication from them on using the original main leaf, all new but the mains. All good, should be ready in a month.
J

rascole said:
Dropped off the broken leaf springs to Deaver. They are going to make it right, full set getting replaced. A miscommunication from them on using the original main leaf, all new but the mains. All good, should be ready in a month.
Click to expand...

Good to hear they are going to make it right, but a month? Really? When they screwed up by not listening to the customer?

I won't be back home until the end of May so I told them to take their time.

I figured with having leaf spring breaks 2 years in a row I’ll take matters into my own hands. Bun trail welder!
!